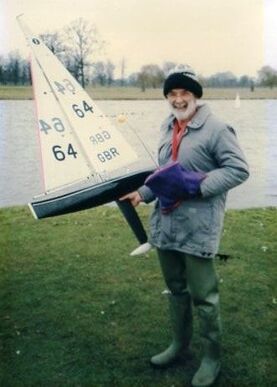 We have sadly lost one of the stalwarts of the Club, Dennis Moss, who passed away on Sunday 5th January from prostate cancer. He was Club Sailing Secretary for many years and, latterly, he held the honorary title of Commodore of the Club in recognition of his sterling work for the Club which did much to improve the quality of racing and Club facilities. Because of his health problems he was unable to come to the Club regularly in the last three years and we missed his enthusiasm for sailing and his cheerful and kindly attitude towards other members, particularly beginners in the sport.

He was also a member of Guildford Model Yacht Club prior to joining Hampton Court MYC and they also have written a tribute to him as Dennis joined that club in 1990 and was an enthusiastic Marblehead sailor there until he moved to Hampton Court. He was an electronics wizard and both Clubs have enjoyed using his starting machine that he made for each of them, which really comes into its own in bad weather, as it has a more powerful sound than the modern version and can be heard over the wind noise more easily. For their Christmas race, Guildford MYC always encourage dressing up to get into the festive mood and Dennis took this really seriously and not only dressed the part, but used his electronic genius to have lights on his boat and also music playing as it sailed along. He was also interested in improving Marblehead design and experimented with T- foils on the rudder of his STARKERS.

He will be greatly missed by all his family and members of both Clubs.
Charity IOM Race, Sunday 5 January 2020
Set out below are the results of a very successful day's racing. So far, the event has raised over £500 for "Momentum", a local charity providing support for children receiving cancer treatment and their families. Photos and a report are also set out below 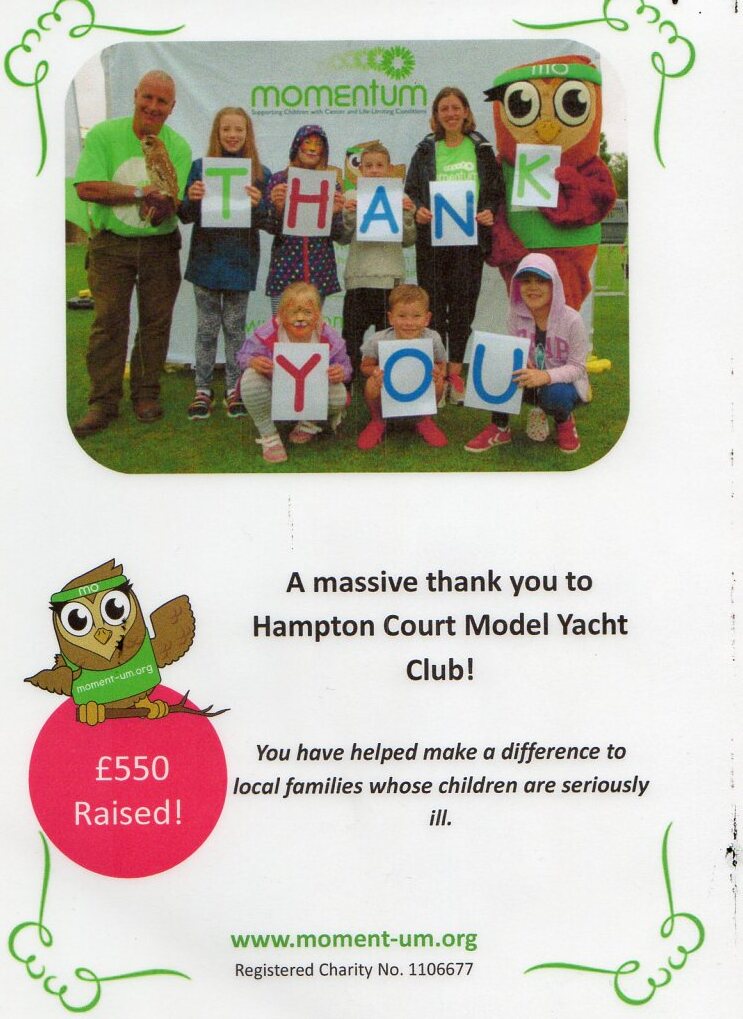 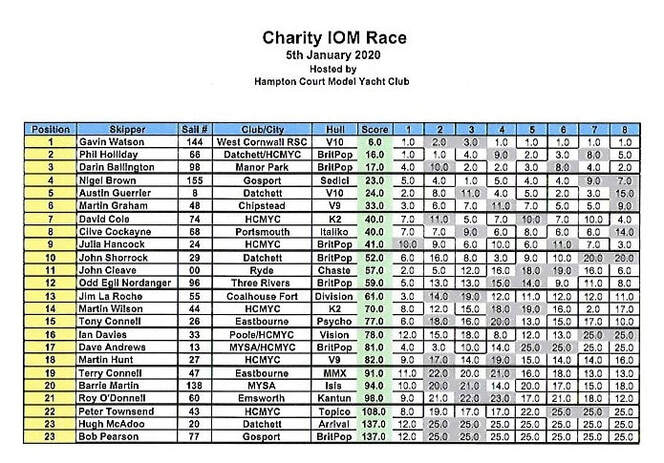 Hampton  Court MYC held it's annual charity open meeting for the One Metre class on 5th January which attracted an impressive 24 entries.
Weather conditions on the day were excellent given the time of year although we could have done with a little sunshine to brighten things up. The 6-8 mph breeze came in from the South West which allowed a decent windward/leeward course to be laid. An offset mark was added to the windward turn and a gate at the bottom of the downwind leg prevented any traffic jams.
Racing started promptly after the 10:00 briefing and continued at good pace without any issues on or off the water. On completion of race 4 it was clear that Gavin Watson (West Cornwall RSC) had the edge on the rest of the fleet, followed closely by Phil Holliday (Datchet) and Charity event stalwart Darin Ballington (Manor Park).
At 12:30 all competitors adjourned to the club house for home made soup and rolls provided by the host club.
The weather improved for the afternoon's sailing and a further 4 complete races were squeezed in before the 15:15 cut off point. This allowed everyone two discards to their scores. A quick count up of the results revealed that Gavin had won by a convincing margin scoring only six points. Phil and Darin followed with 16 and 17 points respectively

No one could dispute that the on water racing and the camaraderie were top notch and probably only bettered by the generosity of the competitors and members of Hampton Court in their support for Momentum Childrens Charity . More than £500 has been raised making this a very worthwhile event.

PS
Sincere thanks to all involved in this year's event. We will be delighted to see you all (and more) next year, the date has already been set for 10 January so please add to your diary now.     Colin

​IOM For Sale
Click on "For Sale/Wanted" page for details.

THEN                      AND                      NOW
Model yachting has taken place on the Rick Pond since 1897. Hampton Court Model Yacht Club is one of the largest and most active clubs in the UK. The Club has its own clubhouse and car park situated near to the Rick Pond. We host events at Local, District and National Levels and sail mainly radio controlled yachts but there is also a keen group sailing vane and vintage boats. We sail 5 different classes - the International One Metre (IOM), the Marblehead (M), the 10 Rater (10R) the A Class (A) and the Dragon Flite 95 (DF95). The Club has an enthusiastic membership and promotes friendly and competitive racing which takes place up to 3 times per week throughout the year. You can find us at the Rick Pond from about 10am on Wednesdays, Saturdays and Sundays.